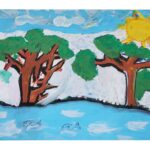 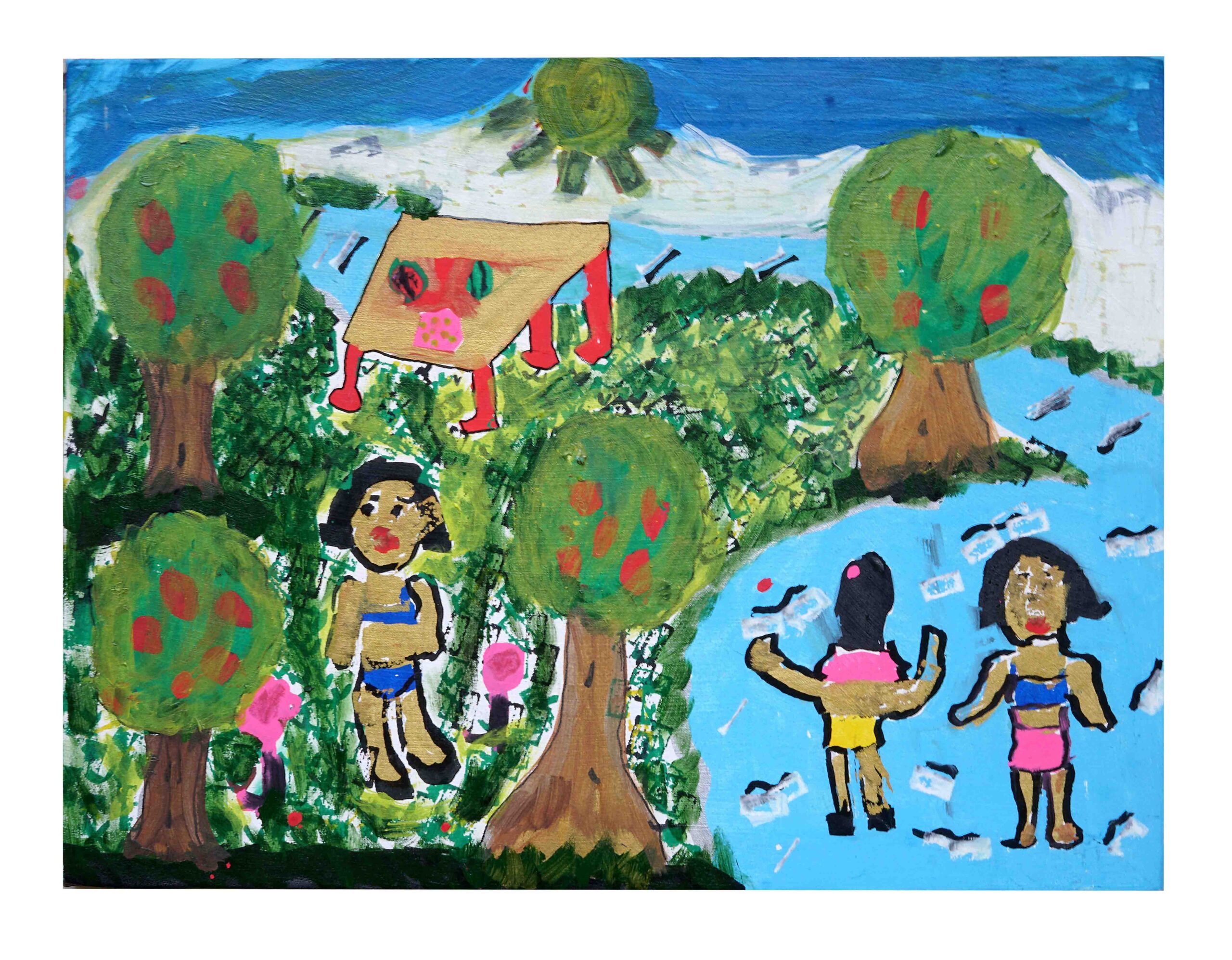 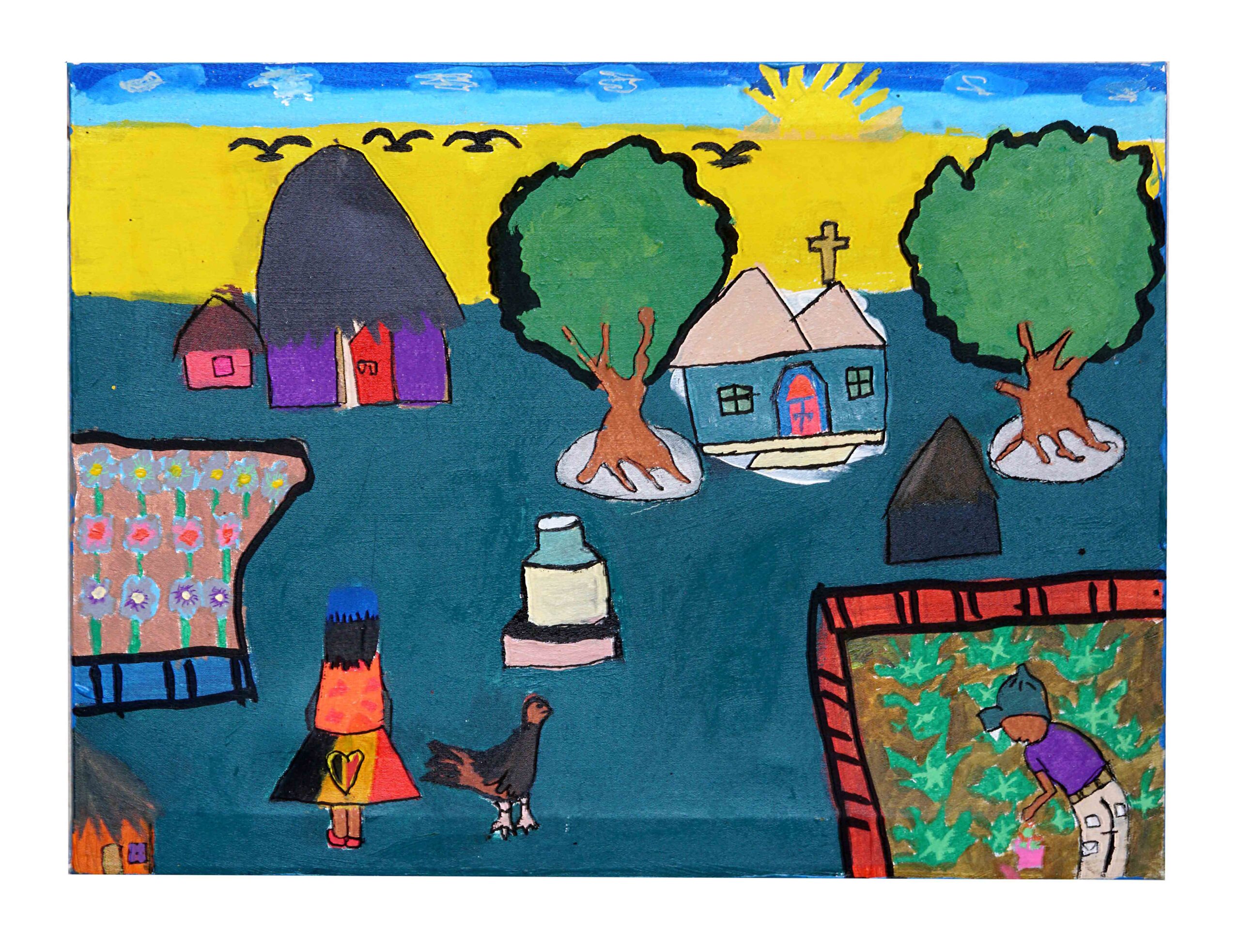 Only 1 item(s) left in stock.
... people are viewing this right now

Only logged in customers who have purchased this product may leave a review.

There are no reviews yet. 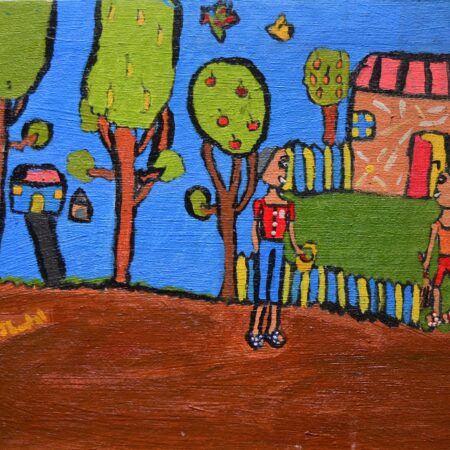 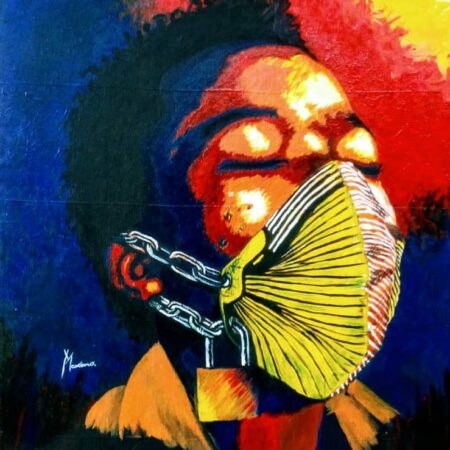 A positive memory behind this piece titled “pause” is that due to the lockdown, many pauses around the world, there were few cars, fewer flights and less pollution. While we were panicking due to covid19, mother nature was healing. 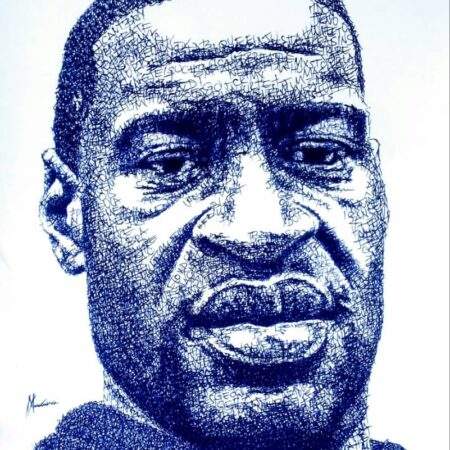 I can’t breathe $150
“Please I can’t breathe,
My stomach hurts,
My neck hurts,
Everything hurts,
They are going to kill me…” Geoge Floyd.
What I can say about this is that “BLACK IS HUMAN TOO, NO HUMAN IS MORE HUMAN THAN ANOTHER”.
By purchasing this artwork, 70% of the price you pay will support the education of children we empower while 30% will support our administrative costs to continue offering free art sessions to children from underserved communities. 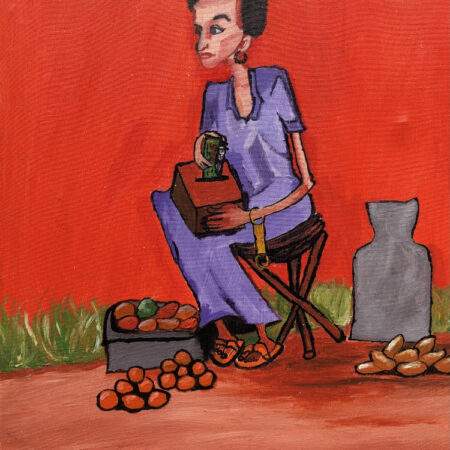 Emelyne, 18 years, Burundian She loves art and her parents as well.  Since she doesn’t study, she spends most of her time practising art at Youth Rescue Organisation, located in the Nakivalee refugee settlement. Ever since she left Burundi and came to Uganda, it has not been easy for her and her family, but she is grateful that art has kept her mind focused and active. She wants to become a professional artist and become good at painting. She also wants to become an art teacher to pass on her knowledge to other people. Being part of the exhibition is a great opportunity for her to show her talent. Most people think that refugees, especially girls’ can’t do anything. However, she believes that when they see her painting, this mindset will change. She hopes to gain visibility for her works and make some sales to buy materials and continue painting. She advises young girls like her to learn skills like art to help them in the future. 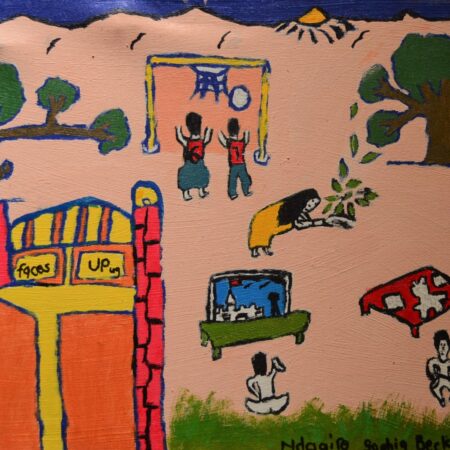 Title: A right to everything

Ndagire is 13 years, Ugandan. She is a jack-of-all-trades and a master of all. She is a multi-talented young girl who loves to crochet, dance and paint. She draws inspiration from the things around her.  Seeing her father is one of the things that inspire her. To her, the family is everything. 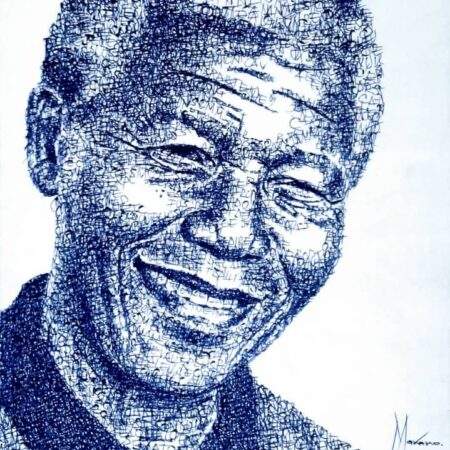 Nelson Rolihlahla Mandela served as president of South Africa from 1994 to 1999 and was the first South African to be elected in a fully representative democratic election. Before his presidency Mandela was an anti-apartheid activist., and the leader of Umkhonto we sizwe, the armed wing of the African National Congress (ANC).

In 1962 he was arrested and convicted of sabotage and other charges, and sentenced to life in prison. Mandela served 27years in prison, spending many of these years on Robben Island. Following his release from prison on 11 February 1990, Mandela led his party in the reconciliation. In South Africa, Mandela is often known as Madiba, his Xhosa clan name. Mandela has received more than 250 awards over 4 decades, including the 1993 Nobel peace prize.

By purchasing this artwork, 70% of the price you pay will support the education of children we empower while 30% will support our administrative costs to continue offering free art sessions to children from underserved communities.

The artwork is about playing sonko (a traditional game played mostly by girls) in African communities. Drawing makes Namakula happy and gives her the opportunity to imagine a wonderful place where everything is amazing. She loves to draw flowers, trees, people and houses. During her free time, she enjoys playing “ludo”, listening to stories, skipping the rope, and dodgeball. 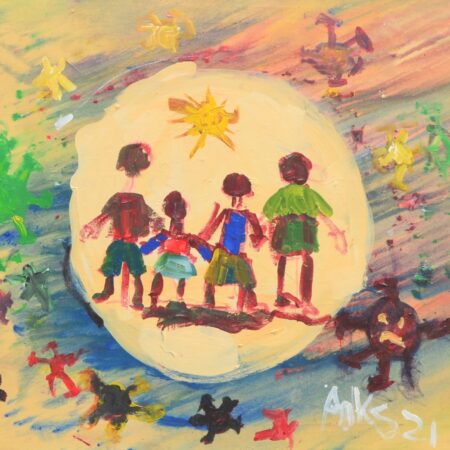 Brave Ntakky Ankunda, 7 years old. He dreams to be a great artist. Ankunda loves art. Painting is about love and enables him to share the love with the world with his art. Ankunda advises his peers to be focused and love one another.

What’s more, is that his name Brave was inspired by the miraculous come back to life after he was in a coma for about a week and since he returned to life, art has been a healing process for him to regain his strength. All his artworks are special and created from a deep sense of consciousness with the hope to spread love and peace. 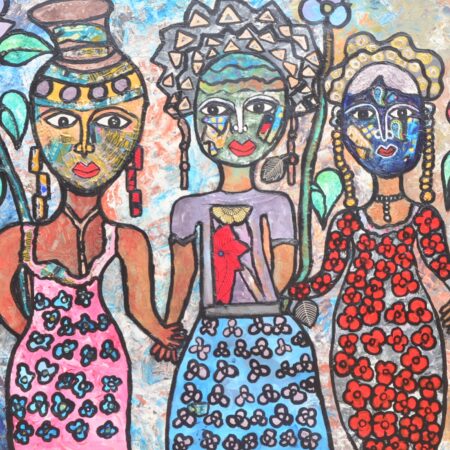 Title: In this together

Media: mixed media Nabulime is an 18-year-old multimedia artist. Her artworks seek to echo the life and struggles of young girls to engage the audience in examining the silenced world of teenage girls. While she uses a variety of materials and processes in each art piece, her methodology is consistent.

She has no grand illusions that art will create a revolution in the traditional sense, but she has witnessed the powerful changes it can make in an individual. Just one new idea can change a person’s perception. Creating art isn’t just an occupation to her; it’s a passion she enjoys bringing life to the canvas with vibrant colours and finding new ways to make people see things. 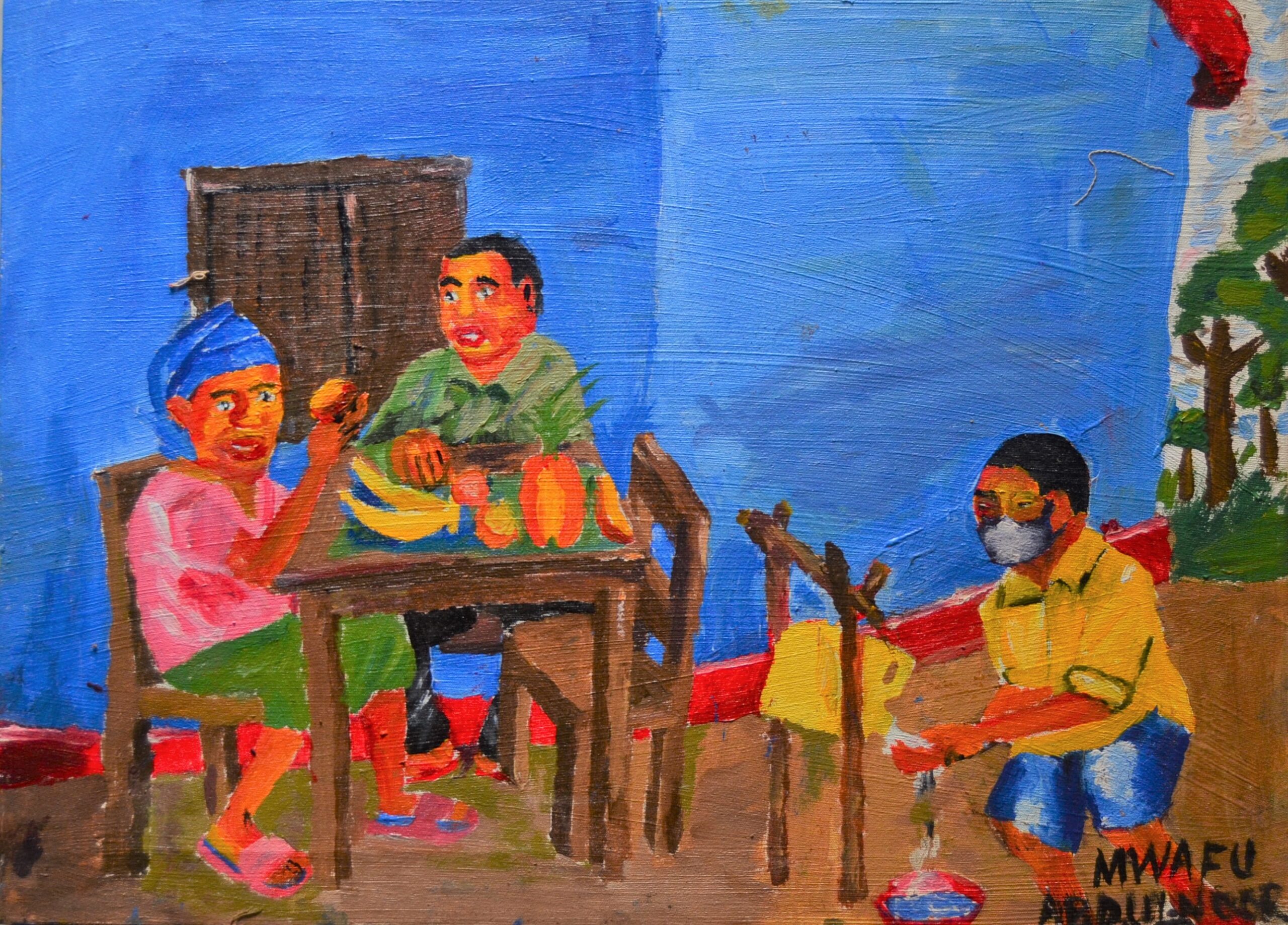 Prevention is better than cure $110

Title: Prevention is better than cure

Mwafu  is 14 years old and is in senior one. He started drawing when he was in primary 6 and mostly drew still life.  Now he draws faces of people, trees. He wants to become an artist and an engineer. He took part in the exhibition while he was in Mbale. 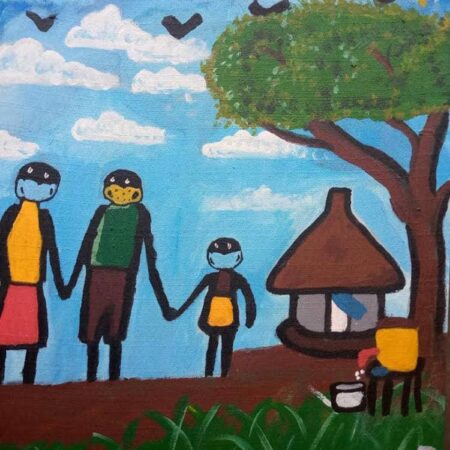 Bridget Lajara is 18 years old. Her dream is to become the best female artist in Uganda and this is based on her passion for the arts. She participated in the art contest because she wanted to show the world what a girl can do with her talent. Travelling to Kampala for the exhibition is the first thought that came into her head after she got the news of being selected in the finalists. Lajara advises other girls and youths to always use the opportunities presented to them because they might never know where they can lead them. 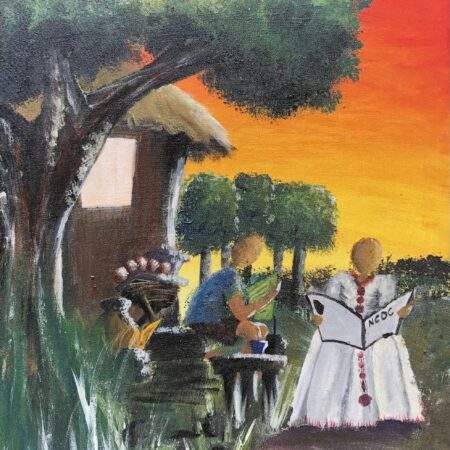 Apio is 19 years, Ugandan. She started drawing while still very young at her primary level. She used to draw things like stickmen, flowers, boys and girls holding hands, and trees just like any other child. The objects she draws about now are out of the world. She doesn’t enjoy drawing interiors but imaginary things. She loves art as well as fashion and hopes to pursue both. Apio has an eye for art, and she loves everything artistic and enjoys putting things together. She also thinks that, later on, she will venture into events. As an artist, she gets her inspiration online, especially when she sees artworks from other artists. She doesn’t like to draw human faces because they give her a hard time, but she also knows that that’s not an excuse.